“If you take out the team in teamwork, it’s just work. Now who wants that?” 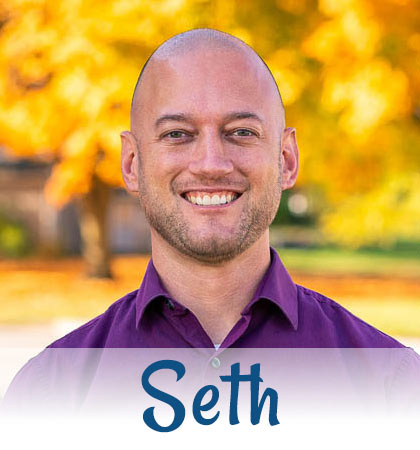 While growing up in Middlebury, Seth always thought we needed a technology company locally. When he met Joel in Kindergarten at Middlebury Elementary he had no idea the two of them would make that a reality. Seth has been managing small business networks since the origin of Crystal Valley Computers in 2007. He has a degree from Goshen College and enjoys being involved in the community and Church. He has served as Treasure for the Middlebury Kiwanis Club and President of the Board of Directors for PC’s for Youth as they transitioned into a true non-profit and received their 501(c)(3). He is currently serving as Treasurer for the Middlebury Chamber of Commerce.

Seth is married to his high school sweetheart, has two sons and one daughter. He loves spending time with his family and also enjoys most competitive activities. For example he loves tennis, chess, paintball, and all sorts of computer and board games

Joel grew up in Middlebury and he continues to live in Middlebury with his family. He has been married for eight years with two young daughters. Joel met his future business partner, Seth, when they attended Kindergarten together at Middlebury Elementary School. Joel has a degree from the University of Phoenix. He oversees the sales, procurement, and the Account Manager teams at our office. Joel puts experience working for his Dad’s electrician company while growing up to good use at Atlas IT. His project management skills and cabling skills allow us to implement large professional projects for our clients.

Joel is an avid football fan, cheering on the Colts and Notre Dame when it is that time of year. He also enjoys serving the community and is a Middlebury Optimist Club Past President.

Daniel was the first employee hired at Crystal Valley Computers and has been an integral part of our team from the get-go. He currently assists the management team in making strategic decisions as well as manages the helpdesk. He has over eight years of IT experience, including software instruction and training, and is our Point of Sale specialist. He is an advisory board member for Northridge Dollars for Scholars.

Daniel has a psychology degree with a minor in youth ministry from Goshen College, and met his wife while attending college. He has two young twins at home. When not working or taking care of his children Daniel enjoys watching and participating in most athletics, having coached several teams including high school tennis, elementary basketball, and Special Olympics.

Kyle met Seth and Joel while attending Bethany Christian High School and they have been friends ever since. Kyle grew up in Goshen and currently resides in Elkhart. He has a degree from Full Sail University in Florida. Kyle has loved tinkering with electronics since a young age. When not working with computers Kyle is engrossed in his many hobbies. He is an avid gamer and enjoys many different online games. He enjoys photography as well as videography and has recently become an RC enthusiast enjoying flying airplanes and multi-rotors.

Meredith joins our team with a degree from Ferris State University and over 14 years of customer service experience under his belt. When he is not busy helping our clients he enjoys spending time with his family and his dogs, and helping with his wife’s dog grooming salon. He is passionate about reading, writing, and games of all kinds.

Rob grew up in Shipshewana. After attending Purdue University and IUSB he settled into the technology field and has been working with technology professionally for more than 16 years. He currently lives in Goshen. Rob loves dogs and owns a pug mix. His hobbies include watching television and playing video games.

Chris has been a part time member of our team since 2010. He has over 10 years of professional technology experience and has an unmatched skill for remembering hardware specifications. You can often find him in our back room tackling our toughest technology quandaries.

Dan has had a passion for computer technology ever since he received a Tandy Color Computer for Christmas as a kid. He has worked for several IT companies over the years and is a former network administrator with a degree in computer science from Ivy Tech. Dan loves to play chess and euchre. He lives in his hometown Bristol, Indiana with his girlfriend Jessie while his daughter Ceridwyn attends Butler University for degrees in physics and astronomy.

Janelle was born and raised in Goshen and currently lives in her old childhood home with a family of her own. She is a proud wife and mother of two beautiful young girls. She currently enjoys tea parties, playing dress up, all things Disney, and dancing like it’s 1999.

Although her degree is in elementary education, Janelle brings 12 years of administrative experience and feels this company is the perfect fit for her and her family. She appreciates the beliefs and values that the company was founded on, which has made it an easy transition for her.

Tane was born and raised in the area and currently lives just outside of Goshen with her husband, Gregg. A graduate of Manchester University, she has worked in accounting and administrative services for over 20 years. Tane attends Rock Run Church of the Brethren and has served on various committees along with teaching Sunday school. Most of her free time is spent playing with her two young granddaughters.

Carissa was born in California and moved to Indiana in 1998. After high school she studied social work and continued to work in the field for 11 years. After 11 years, she decided to return to school and is currently working towards getting a degree in software development.

In her spare time Carissa is busy raising her daughter. When they are not running around to various extra curricular activities, Carissa and her daughter enjoy baking and crafting.

Aaron grew up across the states of Indiana, Ohio, and Kentucky. His love of computer technologies started when he was a wee lad when he would spend time studying his family’s home computer and would find ways to speed up and upgrade it. When he graduated high school, instead of going the traditional route, he spent the next three years in volunteer work and missions across the globe. After this, he decided to pursue his love of computer technology’s and joined Atlas’s team – where he’s been ever since.

Aaron is an avid motorcycle and bicycle rider. He spends his summers outdoors and his winters wishing it was summer. He enjoys playing ultimate frisbee, video games, photography, videography, and hanging out with his friends.

Geo was born and raised in Osceola, Indiana and is a graduate of IUSB with a BS in Computer Science. He is certified in Advanced Computer Programming, HIPAA Compliance, and Criminal Justice Information Systems. When he’s not working with technology, he enjoys being at home with his wife & pets, home brewing mead and training for triathlons.

Lori was born in the Philippines and moved to Singapore in 1998. It was there that she was exposed to the corporate world of multi-national companies, holding positions in Human Resources, Accounting, Audit, Compliance and Payroll. She went to Michigan in 2018 before finally settling in Indiana.

Lori is an avid reader and a nature lover. If she wasn’t reading, she will be out scaling a mountain or exploring corals. Although she is still passionate with her hobbies, it is being with family and staying connected with them that she cherishes the most. Her family lives in US, Asia, Middle East and Australia.

Steve grew up in Bristol and graduated from Northridge High School, but moved back to Northern Indiana in 2019 after spending the previous 15 years in other parts of the country. Most recently, he lived in Harrisonburg, Virginia the past 10 years, where he earned a Masters in Organization Leadership in 2019. He enjoys staying active by playing soccer and running as much as possible, or going on walks with his dog, Sagan. When he’s less active, you can find him doing various woodworking projects or doing anything related to astronomy!

Manuel is part of our On Call Rescue team. He was born and raised in South Bend and studied Biology in college but quickly gained interest in an IT career through friends. He enjoys staying physically active by playing in various softball, baseball, and soccer leagues throughout the year. He has been an avid hip-hop/rap listener and follower since a young age and enjoys going to concerts (back when that was possible!). When not at work or playing sports, you can catch him doing yard work, hanging out with friends, or making hip hop beats on his music hardware!

Simon grew up and currently lives in Goshen, Indiana and graduated high school in 2019. He built his own computer at 15 and has been messing with computers ever since. Some of his hobbies include soccer, video games, and snowboarding.

Ready to Get Started?

Learn more about how Atlas IT can improve your business!

GET IN TOUCH
Go to Top